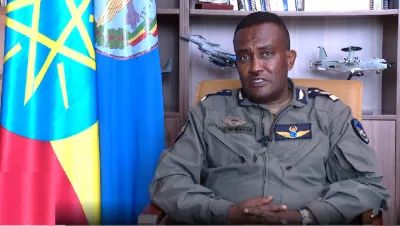 Ethiopian Air Force says it is fully prepared to prevent any possible enemy activity on the Grand Ethiopian Renaissance Dam.

At the same time, he said, the Ethiopian Air Force is better equipped than ever with its members and modern technology.

He explained that the fighter jets, which used to be only a short flight, can now fly for more than four hours and are digital.

According to Major General Yilma, a system has been set up to monitor, give orders and carry out the duties of the Ethiopian Air Force as a single center.

He said the Air Force is committed to protecting the Grand Ethiopian Renaissance Dam from any attack, including other major projects.

He said the air force will be closely monitored around the dam.

In this regard, they say, we have a reliable ability to prevent and prevent any harassment or hostile activity.

He said the Ethiopian Air Force is known for its bravery and efficiency in achieving its mission.

He said the Ethiopian Air Force is the foundation of the past, adding that it is equipped with the latest technology and is capable of carrying out its mission in a short period of time.

He also confirmed that the Air Force is currently using the latest technology in aviation and air defense.

Ethiopian troops had moved into the area following the Sudanese army’s raid on the border with Ethiopia.

Statement on the Tripartite Meeting of the Ministers of Foreign Affairs and Water Affairs of Ethiopia, Egypt and Sudan

Errecha festival is being celebrated