Ethio File
Home Politics Ethiopian PM says “Upper house decision is for the people, not for... 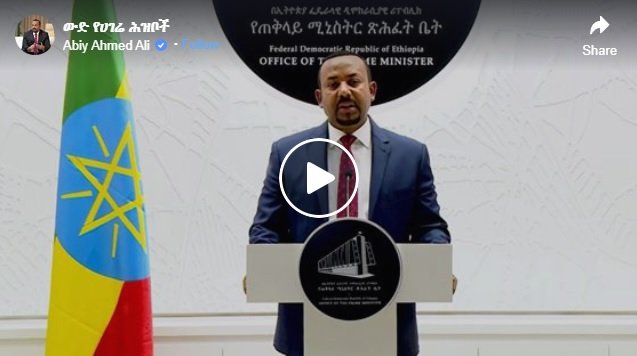 Ethiopian Prime Minister Abiy Ahmed spoke about priorities during extended government mandate periodEthiopian PM addressing Ethiopians in a video message. Photo: Screenshot from video (OPM)borkenaJune 12, 2020Days after ethnic Oromo nationalist parties and some national parties expressed opposition to the recent decision from the Ethiopian House of Federation on the next general election; Ethiopian Prime Minister Abiy has conveyed a video message for the Ethiopian people.In the eleven and a half minute’s messages, he expressed his conception of the process that led to the decision, the challenges he thinks Ethiopia is facing, and priorities for the government during an extended period.“The process that led to the decision of the House of Federation [which extended the terms of the federal and regional house of representatives and the prime minister’s on a temporary basis] is unprecedented,” he said, “it has demonstrated that the democracy of our country could further develop on its own.”After the National Electoral Board of Ethiopia reported to House of People’s Representatives expressing its inability to conduct the sixth general election as scheduled in August due to the Coronavirus situation in the country, the parliament referred the case to the House of Federation (the Upper House) recommending to have the constitution interpreted to postpone the election legally. The Upper House, in turn, referred the matter to the Constitutional Inquiry Commission. The Ethiopian upper house’s decision to temporarily extend the terms of the regional and federal parliaments is informed by the recommendation from the commission. Abiy Ahmed in his message said that the process has addressed the current challenges while “helping the country to experience democracy.”In what seems to be a message for the opposition parties which opposed the decision of the upper house, Prime Minister Abiy said that “the decision is a decision for the people, not for the government, or parties.”  He also said that he sees the moment a mission is given to the government to defend the country and the people. It is time for more responsibility.“Ruling party will continue to have discussion and consultation with the opposition on major national issues in the interest of developing democracy further and building national consensus, ” is another key message he conveyed to the opposition. He emphasized the importance of reaching consensus with the opposition on major national issues that will define the future of the country although he left it blurry as to what those issues are. Opposition parties have been accusing his government of not having adequate consultation on the issue of postponing the election and extending the terms of government on a temporary basis.Abiy addressed that accusation too. “It is not time to point fingers at one another.”  He added, “We will work together to ensure the next election is free, fair and credible.”  He also seized the opportunity to speak at length about the socio-economic challenges that Coronavirus is posing, and he called upon Ethiopian opposition parties to do their part to tackle it.There is anticipation, according to Abiy Ahmed, that the Coronavirus situation could get worse as the rainy and cold season for the country is arriving.In terms of government priority during the extended period, he sees the possibility of challenges to the sovereignty of Ethiopia – among other issues.Watch his video message below ( in Amahric) Join the conversation. Like borkena on Facebook and get Ethiopian News updates regularly. As well, you may get Ethiopia News by following us on twitter @zborkenaThe post Ethiopian PM says “Upper house decision is for the people, not for government” appeared first on Borkena Ethiopian News.

Errecha festival is being celebrated